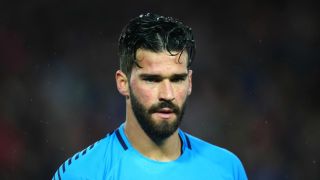 Roma sporting director Monchi insists the impending exit of Alisson does not demonstrate a lack of ambition as the goalkeeper closes in on a world-record move to Liverpool.

The Premier League club have long been linked with the Brazil international and a deal - rumoured to be for £67million - is nearing completion.

Alisson enjoyed an impressive 2017-18 season with Roma after taking over as first choice from the departed Wojciech Szczesny, and his arrival at Anfield could finally solve a problem position for manager Jurgen Klopp.

Monchi confirmed the player has travelled to Liverpool after the Serie A side decided to accept a "very substantial bid" for the 25-year-old.

"We haven't finalised anything yet [with Alisson]. But it is true that the negotiations are advanced and he's over in Liverpool now," Monchi - speaking at a press conference to welcome new signing Justin Kluivert - told the media.

"When a very substantial bid comes in, you have to consider it. We thought about the pros and cons and decided to talk to Liverpool about the deal."

Monchi: "We haven’t finalised anything yet [with Alisson]. But it is true that the negotiations are advanced and he’s over in Liverpool now."When a very substantial offer comes in, you have to consider it. We weighed up the pros and cons and decided to speak to Liverpool." July 19, 2018

Alisson's switch to England, where he will join up again with former Roma team-mate Mohamed Salah, comes after Radja Nainggolan was allowed to join domestic rivals Inter in June.

However, while understanding the frustration from fans at another major departure, Monchi has rejected the suggestion Roma have become a selling club.

The Spaniard has made additions ahead of the 2018-19 campaign, with winger Kluivert and midfielder Javier Pastore - signed from Paris Saint-Germain - among the new faces at the Stadio Olimpico.

"Selling Alisson would not show a lack of ambition. For me, ambition is about doing the right thing after thinking everything through," Monchi said.

"I came here to build a strong team, not just for one year but for many years to come – and I'm 100 per cent sure that will be the case.

"I understand the fans' view. I want them to know we're working to build a stronger team.

"Some people never thought we'd be able to sign Kluivert. The same goes for Pastore. Perhaps today is tough for some fans, but we've brought in top players."