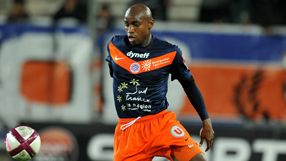 Montpellier, who along with pundits never considered themselves title contenders before the season, are on 69 points with five games to play.

Camara was lucky to score after five minutes when a Younes Belhanda cross bounced off his knee before hitting the post to go into the net.

Montpellier, whose attacking flair has stunned French football this term after they finished 14th last season, focused on their defensive effort for once after they were beaten at relegation-threatened Lorient last weekend.

The Ligue 1 leaders had few chances against Valenciennes, though they were denied a penalty when Nicolas Isimat-Marin handled a John Utaka volley.

"We needed to reassure ourselves at home and we did," playmaker Belhanda told Foot+ television.

"We will watch Paris' match tomorrow, but we are more focused on ourselves and the league matches to come."

Eden Hazard, being watched by a host top European clubs, set up a goal and scored the second in the first half to earn third-placed Lille a 2-0 win at Dijon, who were reduced to nine men in the second half.

Champions Lille were down to 10 men after just 36 minutes of a dirty game.

Captain Rio Mavuba fired into the top corner from a Hazard pass in the 39th minute, then the Belgian bent the ball past keeper Baptiste Reynet from close range in first-half stoppage time to seal the victory.

Lille occupy the Champions League play-off round berth with 62 points, eight ahead of Stade Rennes, who climbed up to the fourth spot after they beat Brest 1-0 away.

Julien Feret scored from the penalty spot seconds before the half-time to grant Rennes their third consecutive league win.

Olympique Lyon, who hosted Lorient on Sunday, are fifth on 53 points along with Saint-Etienne, who thrashed Caen 4-1 away thanks to a Pierre-Emerick Aubameyang brace.

Toulouse are also on 53 points after they lost 2-1 at mid-table Evian-Thonon-Gaillard.

Olympique Marseille extended their run to 12 league games without a win as they were beaten 2-1 at fellow mid-table side Girondins Bordeaux.

Brazilian playmaker Jussie put the hosts ahead in the first minute from a Yoan Gouffran pass and then unleashed a powerful shot to double the lead midway through the half.

Jordan Ayew volleyed home from a corner-kick in the 57th minute for the visitors, whose goalkeeper Steve Mandanda saved a Benoit Tremoulinas penalty midway through the second half.

Bottom side Auxerre, who featured in the Champions League group stage last season, lost 1-0 at Nice to stay five points from safety.