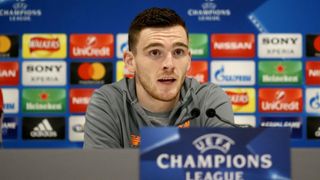 Liverpool defender Andrew Robertson has warned his team-mates not to focus too much on Cristiano Ronaldo during the Champions League final against Real Madrid.

The Reds face the holders in the decider in Kiev on Saturday, when Zinedine Zidane's side will be aiming to become the first team since Bayern Munich in 1976 to win the European Cup three times in succession.

Madrid's Portuguese superstar Ronaldo has been enjoying a rich vein of scoring form in recent months, but Scotland left-back Robertson knows the Spanish giants have plenty of other potent threats within their ranks.

"It's a great challenge but the problem with Real Madrid is that they're all fantastic players," he told the Guardian.

"If you focus on Ronaldo then somebody else will pop up. But we'll have a game plan and look at all of their strengths and weaknesses."

Robertson has enjoyed a rapid rise to the upper echelons of the game after leaving relegated Hull City for Liverpool in 2017, and the 24-year-old is determined to make the most of his opportunity at the NSC Olimpiyskiy Stadium.

"Football is full of highs and lows but when people retire they often say: 'I wish I'd enjoyed it more.' I'm now playing at one of the biggest clubs in the world in a Champions League final. Of course there's still that pressure, but you need to enjoy it. I will."

As for the prospect of helping Liverpool to win what would be the club's sixth European Cup/Champions League crown, he said: "It's hard not to think about it.

"When you're lying in bed you just think: 'What if?' That's natural.

"Real Madrid have been to three finals in the last four years so they'll do the same.

"But the head is the worst part of the body because it can let you wonder. It's about making those happy thoughts a reality. Of course we believe we can win it - but we know how hard a task we face."