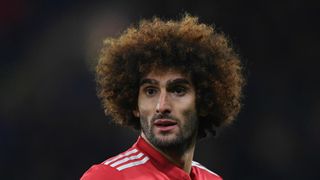 Fellaini lasted only seven minutes as a second-half substitute before having to be withdrawn as United were beaten 2-0 at Tottenham in the Premier League on Wednesday.

And after a 2-0 victory against Huddersfield Town on Saturday saw United return to winning ways, Mourinho said Fellaini is likely to be sidelined until the end of March.

"He had surgery this morning," Mourinho told a news conference.

"I don't want to be very specific, I would prefer the doctor to give you some information officially.

"It's not the end of his season, not at all. It's a small intervention in his external meniscus and I want to believe that by the end of March he can be back.

"And if he can be back by the end of March, I hope we have a big April and a big May still to play in more than one competition."

Speaking before the trip to Huddersfield, Mourinho urged Fellaini to accept the offer of a new contract, with his current deal set to expire at the end of the season.

The United boss said the Belgium international - who will hope to regain match fitness ahead of the World Cup - should "sign the contract and shut up", with Arsenal, Besiktas and Paris Saint-Germain among the clubs linked with the 30-year-old.