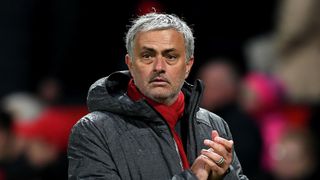 Jose Mourinho is "relaxed" in his pursuit of Arsenal forward Alexis Sanchez, with Manchester United widely seen to be in pole position to secure the Chile forward.

Sanchez has long been touted for a move to Manchester City and a reunion with his former Barcelona boss Pep Guardiola, but the Premier League leaders were unable to complete a deadline day switch in August.

Events are understood to have developed dramatically over recent days, with City reported to have pulled out of the running on account of increased financial demands from Sanchez and his agent Fernando Felicevich, while also remaining shy of Arsenal's asking price.

"I am not confident but I am not unconfident. I am just relaxed," the United boss told a news conference after Monday's 3-0 win over Stoke City.

"He is an Arsenal player, he can stay there, but I have a feeling he can move and if he moves I think we have a chance.

United have trimmed City's imposing lead at the summit to 12 points after Guardiola's men were dealt a first defeat of the season on Sunday.

Liverpool won 4-3 in a game to rank among the finest in the Premier League this term – not that Mourinho was in a position to offer much of an opinion.

"I didn't watch Liverpool beat Manchester City, it doesn't change anything," he said with regards to the title race.

"The distance is an important distance, I have been there before. They have their destiny in their hands."

Henrikh Mkhitaryan was left out of the United squad to face Stoke amid speculation he could move to Arsenal as a makeweight in the Sanchez deal and Mourinho told Sky Sports a departure for the ex-Borussia Dortmund favourite this month was a possibility.

"He's a player that I like, of high quality," he added. "Is he going to be involved in one deal in leaving us? It's possible. But it's also possible that he stays.

"I'm just trying to protect him and the team, so let's make sure he stays with us or that he leaves us. The market is open."