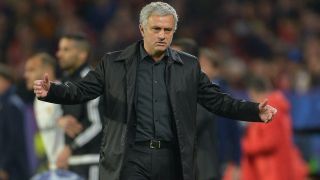 Jose Mourinho openly questioned the conclusions of his medical staff after midfielder Ander Herrera was forced off with a "bad injury" despite apparently being deemed "100 per cent ready".

Herrera had missed several weeks of action ahead of Wednesday's 0-0 draw at Sevilla with a muscular problem, before being thrown straight into the action at the Ramon Sanchez Pizjuan.

The Spain international lasted just 17 minutes before appearing to suffer a recurrence of the issue and Mourinho was quick to point the finger at his medical team for saying Herrera was match fit.

"I think it is a bad injury," said the United boss.

"He had a small injury that stopped him for the last couple of matches, but the medical team said he was 100 per cent ready for the last Saturday. We didn't play him to give him more work and protection, but it looks like he wasn't fully fit.

"The medical department gave him fully fit on Saturday. He trained Saturday, Sunday, Monday and Tuesday and he looked fit.

"The way he was playing during the time on the pitch he showed that intensity that is only possible when fit, when you feel fit.

"Then there was the back-heel and that causes a contraction in the muscular area where he had the previous problem and now we have to prove that he was not 100 per cent fit."

Sevilla coach Vincenzo Montella was upbeat at full-time, praising the character and performance of his side, though he was left ruing their wasteful finishing.

"We had 10 shots on target and 10 corners in the first half," he said. "We were superior on the pitch, but football is like this.

"Not conceding at this stage is crucial. Now we need to score at Old Trafford and I am confident we will.

: "It has been an incredible night that could have been even better"February 21, 2018

"I am proud because the team has shown both quality and character. We had to win, and because of this, we are disappointed for the fans that have been incredible tonight.

"It has been a great night that could have been even better, but it's all to play for now."