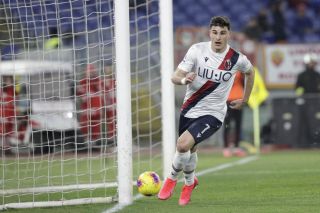 Musa Barrow struck twice for Bologna as Roma missed the chance to climb back into the Serie A’s top four in a 3-2 home defeat.

Gambia forward Barrow scored in each half after Riccardo Orsolini’s opener for Bologna had been cancelled out by Stefano Denswil’s own goal.

Henrikh Mkhitaryan headed Roma back into it in the 72nd minute, but they played out the last 10 minutes with 10 men after Bryan Cristante’s straight red card for his challenge on Orsolini and slipped to back-to-back league defeats.

Bologna climbed up five places to sixth, one behind Roma, after registering their third straight league win.

Alaves clinched their first home win in LaLiga since early November with a 2-1 home victory against Eibar.

Lucas Perez gave Alaves the lead early in the second half and Oliver Burke scored his first goal for the club since joining on loan from West Brom in the summer.

Eibar reduced the deficit with seven minutes left through Fabian Orellana, but the Basque club’s winless run was extended to four league matches.

Game over 😁 !! We take three more valuable points and rack up our 3️⃣rd consecutive @Ligue1_ENG win 👊. @victorosimhen9 and @renatosanches35 with the goals in #Angers 👏. #SCOLOSCpic.twitter.com/KpW9z2Id0s— LOSC Lille EN (@LOSC_EN) February 7, 2020

In Ligue 1, Lille moved level on points with third-placed Rennes as goals in either half from Victor Osimhen and Renato Sanches secured them a 2-0 win at Angers.

Nigeria forward Osimhen finished off a swift counter-attack with a thumping finish, confirmed by the video assistant referee in the 14th minute.

Chandler fired Frankfurt ahead shortly before half-time and headed his fourth goal of the season soon after the restart to put them in control.

The home side went 3-0 up through Andre Silva’s header and winger Kostic scored twice in the final two minutes as Frankfurt extended their unbeaten league run to four matches and climbed into the top half of the table.