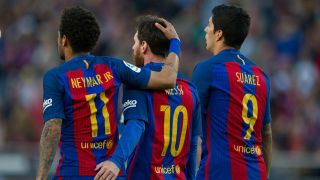 Paris Saint-Germain star Neymar admits he misses being at Barcelona with Lionel Messi and Luis Suarez.

The South American trio formed a fearsome attack under Luis Enrique at Camp Nou, inspiring Barca to the treble in their first season together in 2014-15.

The Catalans went on to win the 2015 Club World Cup, a domestic double in 2015-16 and the Copa del Rey again a year later with their 'MSN' forward line, before Neymar left for PSG in 2017 for a world-record €222million fee.

The Brazil international has been linked with a return to LaLiga in the next transfer window, most likely with Real Madrid, although PSG have moved to calm those fears by using Neymar as part of the publicity for their new kit.

But the 26-year-old says he misses playing alongside his friends at Barca, adding that they got on so well that they would poke fun at each other even during matches.

Proud to wear the new jersey and to continue giving you joyOrgulhoso de usar a nova camisa e continuar dando alegria a todos    May 12, 2018

"We were doing great with Messi, and then came Suarez. He was the icing on the cake. It was great for the three of us, for the team," Neymar told Brazil great Zico in an interview for his YouTube channel.

"Messi and I were close to Suarez. We became inseparable. We get along really well. And we knew what to do.

"During practice, Messi and I would goof around with the ball. He [Suarez] would come up to us and I would be mad at him.

"During a match, I had a play where I beat the defenders and passed the ball. Messi did the same. Suarez tried it too and we began to laugh. We were so close we would laugh at each other when someone wouldn't get something right. He told us he tried to emulate what we had done.

"We had a great friendship. What I miss about Barcelona is playing with Messi and Suarez. We were happy, we were friends."

Neymar has formed a similarly ruthless partnership with Edinson Cavani and Kylian Mbappe at PSG, winning the domestic quadruple in his first season in France.

The former Santos man joked he has already told Brazil team-mate Casemiro to give Mbappe some rough treatment at the World Cup, such is the threat he poses in the France team.

"I already told Casemiro he can go hard on him! He's the best at his age," he added.