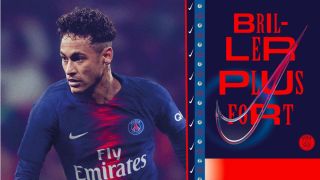 Neymar has modelled Paris Saint-Germain's new kit amid fresh speculation the Brazilian could move to Real Madrid at the end of the season.

Zinedine Zidane said at a news conference on Friday he believes Neymar could be "compatible" with Madrid's star man Cristiano Ronaldo.

Speculation Neymar could seek a LaLiga return after a single season in Ligue 1 has intensified, with reports suggesting the forward has struggled to settle in Paris.

Catalan newspaper Mundo Deportivo claimed on Thursday that Neymar has told his Brazilian team-mates at PSG that he will be leaving the club.

But PSG revealing their new kit with Neymar front and centre in the promotional material could be taken as a sign the Brazilian will stay put.

Neymar, out of action since February due to a foot injury, attended the Coupe de France final win over third-tier side Les Herbiers on Tuesday and is in contention to feature in PSG's last two games of the Ligue 1 season.