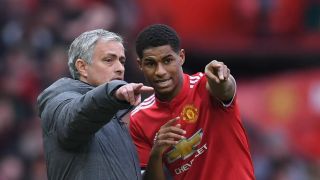 Jose Mourinho says the absence of Marcus Rashford and Anthony Martial from the Manchester United team is down to the strength of his first XI.

Rashford has been restricted to 14 Premier League starts this season, just one of which has come since the beginning of 2018, with the January arrival of Alexis Sanchez appearing to have pushed the England forward down the pecking order.

Martial, meanwhile, has started 16 Premier League games but none since February, although he has been sidelined due to injury, with both forwards hoping to be selected for the World Cup.

Mourinho, though, indicated the performances of Romelu Lukaku in particular have resulted in fewer opportunities for Martial and Rashford to impress, with the Belgium striker hitting 26 goals in all competitions in his first season at Old Trafford.

"If I was you I would go in another direction," Mourinho told reporters ahead of Sunday's game against bottom side West Brom.

"Marcus Rashford is a player with more appearances since I arrived at the club [than anyone else]. I decide that way [to use Rashford from the bench].

"It is just football. We cannot have 11 players – it would be amazing, also economically for the football clubs – to have only 11 players and play always with the same 11 and no injuries or suspensions or fatigue and nothing, it would be better for everyone but it is not possible.

"So at every club at every level, from the top of the world until the amateur football clubs you need more than 11 players and only 11 can start, it is as simple as that, there is nothing I can do.

"Only 11 can start and the same questions you are doing to me, you should do to every other manager because they have players in the same situation."

The boss on keeping focused for the remainder of the season... April 13, 2018

Mourinho previously indicated he will not look to sign another forward at the end of the season, despite regular links with Real Madrid's Gareth Bale, and he confirmed again he will not seek to enter the market again.

"So how can I? Probably I have to reduce and send some away and have a squad of 12 players."

On West Brom's season so far, Jose says: "The quality, the experience, the squad, the stability of the past years - it's a surprise for me that they find themselves in this position." April 13, 2018

"We come from a big result and during the week I was trying to fight that result by making the players work hard and understand that it is not enough to deserve to finish second, we need the points to finish second," said the Portuguese.

"To finish fourth we need four or five points, but to finish second we need much more than that. After three important points last weekend we need to try to do this three and be closer to the end of the season and to the second position which is, in this moment, in our ambition.

"I was working really hard and because I tried to build motivational training sessions with new exercises and things to motivate them, little tactical things I know for some players is motivation. I tried to raise the level of training and I think I managed to do it because I am really pleased with this week."

Mourinho told MUTV defenders Phil Jones, Marcos Rojo and Daley Blind are all available to return to the squad from their respective injuries for the visit of the Baggies.