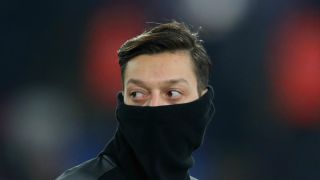 Mesut Ozil and Eden Hazard have both been selected for the Premier League clash between Arsenal and Chelsea on Wednesday, but Laurent Koscielny misses out for the hosts at the Emirates Stadium.

Ozil was unavailable for Arsenal's 1-1 draw with West Brom on Sunday due to a knee injury, while Hazard was rested for the champions' 5-0 thumping of Stoke City a day earlier.

Andreas Christensen returns to the Chelsea team along with Cesc Fabregas, with Antonio Conte dropping Pedro, Antonio Rudiger and Danny Drinkwater to the bench. That trio all netted against Stoke.

With Koscielny missing out due to an Achilles problem, Arsene Wenger names Rob Holding in a back three, along with Calum Chambers and Shkodran Mustafi.

Ozil features with Alexis Sanchez and Alexandre Lacazette in a strong Gunners attack, while Jack Wilshere's recent run in midfield continues with another start.

Arsenal are unbeaten in eight games in all competitions, while Chelsea have lost only one of their last 13 Premier League matches.