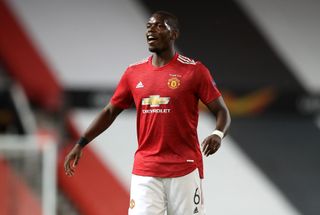 Paul Pogba will not be sold by Manchester United this summer and talks over a new contract at Old Trafford will start soon, according to the France midfielder’s agent.

The World Cup winner endured a difficult 2019-20 campaign due to injury, but he ended the season strongly as he helped Ole Gunnar Solskjaer’s side to a third-placed finish in the Premier League.

And his agent Mino Raiola says United will not accept any bids for the player this summer.

“Man United will not accept any bid this summer to sell Pogba. We’re going to speak about a new contract soon, no stress…”

Pogba, whose current deal runs until next summer, last month revealed his desire to win more trophies at Old Trafford.

United have since been beaten in the semi-finals of both the FA Cup and the Europa League, but are back in the Champions League next season thanks to their impressive form following the resumption of the Premier League.

Pogba has won only the Europa League and EFL Cup since returning to United from Juventus in 2016.