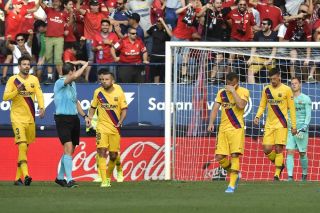 Gerard Pique said there was no cause for concern as Barcelona’s stuttering start to the season continued with a 2-2 draw at promoted Osasuna.

Barcelona, who were again without injured attacking pair Lionel Messi and Luis Suarez, have taken only four points from their first three games.

The Spanish champions have yet to win away this season, with the Osasuna draw following the 1-0 defeat at Athletic Bilbao on the opening weekend.

“We are not worried,” central defender Pique was quoted as saying by Marca after the game in Pamplona.

“It is not the desired start, but we know that this (season) is very long.

“The important thing is to arrive in March or April with options to win the league.

“We would have liked to be with nine of nine (points), but we are having more difficulties than expected.”

Ansu Fati, the 16-year-old who became the youngest scorer in Barcelona history, and Arthur both hit their first goals for the club as the Blaugrana overturned a half-time deficit.

But Pique was at the centre of the game’s defining moment nine minutes from time when he handled in the area.

Roberto Torres drove home from the spot, his second of the game, to protect Osasuna’s unbeaten start to the season.

“I hit it with my hand,” Pique said. “But we always have meetings before the start of the season, and they talk about the distance between the ball.

“It doesn’t give me time (to get out of the way) and I’m jumping naturally.

“I would like that the referees will try to do it. For me, it is not a penalty.”

Barcelona return to action after the international break with a home game against Valencia on September 14.

Ernesto Valverde’s side then start their Champions League campaign three days later away to Borussia Dortmund.

“I do not say that there are nerves, but since the end of last season there are different opinions regarding what the club is,” Pique said.

“It is true that the last two seasons did not go well in the Champions League but we will not burn everything.

A minute of silence in memoriam to the passing away of Luis Enrique's daughter Xana, may she rest in peace. 🙏 pic.twitter.com/P60UFxd4dM— FC Barcelona (@FCBarcelona) August 31, 2019

“There are two options, go for or go against and the best thing for the team is for everyone to go in the same direction.”

Osasuna have made a promising start on their return to LaLiga with five points from their opening three games.

“I have to congratulate the kids,” coach Jagoba Arrasate said at his post-match press conference.

“The idea was to be competitive in every game and at the moment we are.”