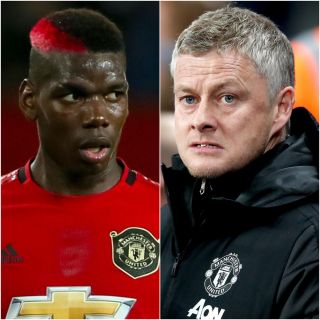 Manchester United manager Ole Gunnar Solskjaer believes Paul Pogba is “desperate” to play for the club again, despite once more being linked with a return to Italy.

Pogba has played just eight games for United this season due to injury and not at all since the 4-1 win over Newcastle on Boxing Day, but has stepped up his recovery programme ahead of a possible return to action.

Solskjaer was no doubt frustrated to see Pogba’s agent Mino Raiola say earlier this week that the player views Italy as his “second home” and wants to return to Juventus, but was not about to agree with the suggestion that it had been a “disastrous” season for the 26-year-old midfielder.

“You’re not going to get that headline from me,” Solskjaer said in his pre-match press conference ahead of Monday’s clash with Chelsea at Stamford Bridge.

“As a player, the last thing you want to be is injured, and not being able to contribute to your team. Paul’s a footballer and he wants to play football. He knows he has to work hard now to get back to his best.

“He’s been out for so long now, it’s a challenge for him as well to get back into shape. I’ve been injured for a long, long time myself, it’s a difficult period of your career, but it’s part and parcel of being a player.

“He’s taken off his cast, so when he comes back here we’ll integrate him with us. Hopefully soon. He’s started running on the treadmill now, so he’s getting closer. It’s been a long haul, this, so hopefully we’ll see him back soon.”

Asked if he could say categorically that Pogba would play for United again, Solskjaer added: “Well of course, I’d like to say that. As soon as he gets fit he’ll be good enough to play for the team and I’m sure Paul’s desperate to play for us again.

“I haven’t sat down and told Paul to tell his agent what to say, but Paul is our player and not Mino’s.”

Solskjaer was able to bring in another midfielder in the January transfer window after finally concluding the drawn-out pursuit of Bruno Fernandes, but has also praised the players who have featured in Pogba’s absence.

“Paul’s an important player for us, but we’ve also learned so much about the others,” he added. “Some other players have really stepped up and taken on this responsibility and shown what they can be and what they are for Man United.

“It’s unfortunate you get some of your best players injured, but that’s just part of it, that’s part of being here. You can’t just say, ‘I feel sorry for myself because we’ve had all these injuries’ – we’re building a squad that can cope with this.”

The other addition to the squad in January came as something of a surprise, with former Watford striker Odion Ighalo joining on loan from Shanghai Shenhua in a last-minute deal.

However, Solskjaer admitted the 30-year-old could earn himself a permanent move to Old Trafford if he impresses sufficiently between now and the end of the season.

👊 Back at home, @IghaloJude is giving everything to be ready for United! #MUFChttps://t.co/wP1SSv5WmV— Manchester United (@ManUtd) February 11, 2020

“It’s a loan, but when you’re in the door, and if you impress, it gives you a chance. That’s exactly the same for everyone who signs,” Solskjaer said.

“That doesn’t just go for Odion but, since you asked, yes, his incentive is to play as well as he can and it’s up to us to make sure he wants to stay, if we want him.”