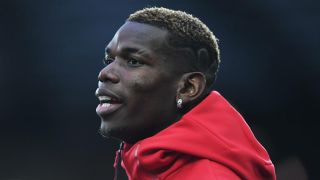 Paul Pogba will not be back for Manchester United's Premier League contest against Southampton on Wednesday, but Jose Mourinho will resist the temptation to play the "kids".

France midfielder Pogba did not travel with United for Sunday's 2-1 Premier League defeat at Tottenham due to the death of his father.

And Red Devils boss Mourinho says Pogba will not be back in time for Wednesday's trip to St Mary's Stadium as he will be attending the funeral.

"I don't think [he will be available]," he said. "I think that his dad's funeral has to be between Tuesday and Wednesday in France.

"I don't think Paul has conditions to play, we let him be completely free when he's ready to be back."

Mourinho has made no secret of his frustration at United's congested fixture list, with the club still having two Premier League matches to fulfil before next Wednesday's Europa League final against Ajax, whose domestic season has already finished.

But despite the games coming thick and fast, Mourinho says it would be unwise to field so many inexperienced players in their remaining Premier League games.

"I have to build some teams with the minimum of conditions to fight for a result," he added.

"So I am going to rotate people. [Daley] Blind will not play against Southampton, [Marouane] Fellaini will because he's not played the last three [league] matches [due to suspension].

"These are examples of trying not to accumulate but people have to play, we don't have other players. I cannot put four or five kids on together in the fire, I cannot do that to the kids."

United's last hope of qualifying for the Champions League is by winning their final against Ajax after a four-match winless league run has left them sixth and seven points adrift of Manchester City in fourth.

But Mourinho says that for the next two domestic matches it is more important to show a fighting spirit than to achieve a victory.

"Blind played [against Tottenham] after 90 minutes on Thursday, of course Fellaini has to play the next because he is not playing now.

"[I want] team spirit, empathy and fantastic attitude that everybody has. It is not one more victory, one more point, one more defeat that will change anything.

"A final is a final, we have to go to the final with everything like Ajax does because they finished the season and have no more football until the final."