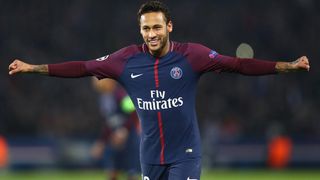 Neymar joined Ligue 1 giants PSG in a world-record deal worth €222million in August but there is already talk of unrest with the Brazil international.

According to reports, Neymar is unhappy with life under PSG head coach Unai Emery, prompting speculation of a sensational switch to LaLiga and Champions League titleholders Madrid.

Asked about Neymar, Madrid captain Ramos told Cadena Ser: "I like to have the best and it's clear Neymar is one of them.

"Maybe it was easier for him to go to PSG, instead of directly to Real Madrid.

"They are personal decisions, you never know what can happen because football goes around a lot.

"I already have the door open for him if he wants to come. I also have a good relationship with him."

He has also netted four goals in the Champions League to lead PSG through to the last 16 with two matchdays remaining.