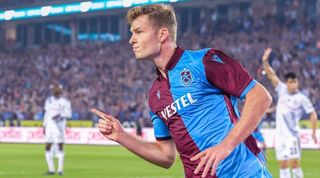 Real Madrid are interested in Crystal Palace striker Alexander Sorloth, who is currently on loan at Trabzonspor.

The Evening Standard reports that Sorloth's impressive form in Turkey this season has caught the attention of the 13-time European champions.

The 24-year-old has scored 24 goals in 34 appearances in all competitions in 2019/20 - which is the same number as Palace have managed in total in the Premier League this term.

This is in stark contrast to the form that Sorloth showed at Selhurst Park following a £9m transfer from FC Midtjylland in January 2018.

The Norway international netted just once in 20 games for the Eagles and was loaned to Gent 12 months later as a result.

Following a brief return to London last summer, Sorloth was sent out again on another temporary spell, this time joining Trabzonspor.

It's unclear whether the forward has a future at Palace, but with Madrid interested it's clear his value has soared and they could be set to make a tidy profit.