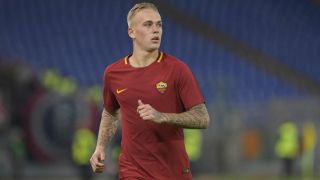 Roma full-back Rick Karsdorp is facing a long spell out of action after tearing a cruciate ligament on his Serie A debut.

The 22-year-old twisted awkwardly during Wednesday's 1-0 win over Crotone at the Stadio Olimpico and was replaced in the 82nd minute by Alessandro Florenzi.

Further tests have confirmed he has ruptured a ligament in his left knee.

"Immediately following the match between Roma and Crotone, the Roma medical staff conducted medical checks on Rick Karsdop, who suffered a twist in his left knee during the second half of the game at the Stadio Olimpico," Roma said in a statement.

"Having sustained suspected ligament damage, the player was subject to further examination during the night. It was subsequently confirmed that he had ruptured the anterior cruciate ligament in his left knee.

"On Thursday afternoon, specialist surgeon Professor Mariani will conduct further tests on the player, in order to establish a treatment procedure."

Karsdorp signed from Feyenoord in June for an initial €14million fee but was forced to undergo surgery to the meniscus of his right knee just days later.

The Netherlands international was only fit enough to make the matchday squad for the first time for the 1-0 defeat to Napoli on October 14.