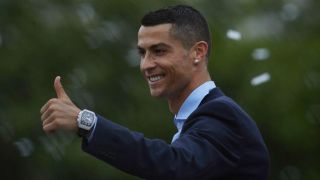 Napoli came close to tipping the balance in Serie A last season, but Juventus will move into a completely different league by signing Cristiano Ronaldo.

Juve have surged to the Scudetto in each of the past seven seasons and few would bet against them taking it to double figures when they complete a phenomenal swoop for the five-time Ballon d'Or winner, who agreed to join the club on Tuesday.

Massimiliano Allegri built on the foundations Antonio Conte laid in Turin, establishing a hegemony the likes of which Italy has never before seen as former challengers Inter and AC Milan laboured to even qualify for European football.

Ronaldo will turn 34 during his first season with Juve, but the Portugal captain remains one of the two best players of his generation. His arrival is a statement of significant intent from the Bianconeri. They are not content dominating solely in Italy. They have Europe in their sights.

As well as widening the gulf between themselves and the rest of Serie A, Juve now boast a player who has won the Champions League five times – four of which have come in the past five seasons – and has scored the most goals in the competition. Greater pedigree does not exist.

Ronaldo's double helped Real Madrid overcome Juve in the 2017 Champions League final and his stoppage-time penalty controversially denied them passage into the semi-finals the following season. But with him on the roster, the Bianconeri's quest to win Europe's premier club tournament for just a third time and first since 1996 will feel tantalisingly close to coming to fruition.

The continent's elite will take notice of Juve's move. An envious glance may well be cast by Paris Saint-Germain, who have not only seen a player they have long been linked to head elsewhere but could be faced with a battle to stop Neymar or Kylian Mbappe being tempted to fill Ronaldo's void at the Santiago Bernabeu.

However, the shockwaves will be felt most severely at home.

When a 90th-minute Kalidou Koulibaly header at the Allianz Stadium on April 22 gave Napoli a 1-0 victory over Juve, they breathed new life into a title race by closing the gap to Allegri's all-conquering side to just one point with four games remaining.

But the Partenopei immediately fell away. A 3-0 loss was followed by a 2-2 draw with Torino, and as fans in Naples commiserated, supporters in Turin celebrated a groundbreaking fourth successive double.

It dented Napoli president Aurelio De Laurentiis' confidence in Maurizio Sarri to the point that he replaced him with Carlo Ancelotti, though the fact Sarri seemingly remains tied to the club amid protracted negotiations with Chelsea provides a frustrating sideshow at Stadio San Paolo ahead of the upcoming campaign.

The additions of Fabian Ruiz from Real Betis and young goalkeeper Alex Meret bode well for Napoli's future, but, along with the headline signing of Simone Verdi, it is unlikely to be sufficient for them to keep pace with Ronaldo's Juve.

After nabbing Champions League qualification in dramatic fashion, Inter have brought in experienced Serie A stars Radja Nainggolan and Stefan de Vrij and exciting young striker Lautaro Martinez, while Roma made up for the loss of the Belgian by purchasing Javier Pastore.

It is difficult to envision either club making up ground on Juve now, though - Milan are unlikely to do so either after being banned from the Europa League after falling foul of UEFA's Financial Fair Play regulations.

Emre Can and Joao Cancelo have also signed on with the Bianconeri, while Douglas Costa has joined on a permanent basis and Wojciech Szczesny looked more than capable of taking over from the legendary Gianluigi Buffon with 11 clean sheets in his 17 Serie A appearances in 2017-18.

Add Ronaldo to the mix and it has been a stunning transfer window for the Turin giants. They have done their utmost to extend their monopoly in Italy and bring Champions League success back to the club.

It is the least Ronaldo will want and it is well within reach.