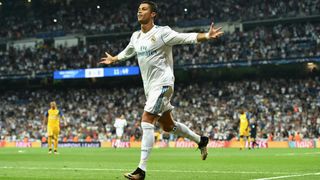 Ronaldo retained football's most prestigious individual prize for the second year running on Thursday, named France Football's player of the year ahead of Barcelona rival Messi.

The 32-year-old claimed the Ballon d'Or for the fourth time in five years after guiding Madrid to LaLiga and Champions League glory in 2016-17, while he moved past 600 career goals with a brace in last season's European final against Juventus.

Iconic Madrid full-back Carlos lauded Ronaldo following the ceremony in Paris by saying: "He will get more. There will be more trophies to come.

"He'll get much more trophies."

Another dream come true. Unbelievable feeling. Thanks to my family, friends, teammates, coaches and everyone that stood by my side throughout the years. December 7, 2017

Another Madrid legend was in attendance in the French capital – Brazil great Ronaldo.

"He deserves the award. And here we are to celebrate with him," the 41-year-old said.