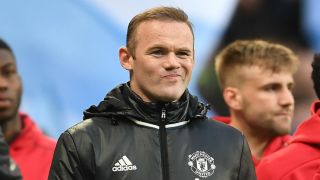 Manchester United captain Wayne Rooney says he does not want to leave the club at the end of the season.

The 31-year-old has seen his importance to the first team diminish under manager Jose Mourinho this term and has made only 12 starts in the Premier League.

Rooney has been heavily linked with a move away from Old Trafford before next term, with clubs in the United States and China and former side Everton all linked with a bid.

But England's record goalscorer, who rejected the chance to leave United in January, insists that he wants to stay at the club he joined as a teenager in 2004.

"Of course you want to play every game. I've had to try to take my chance when called upon. I try to do my best for the team," he told a news conference ahead of the Europa League semi-final second leg against Celta Vigo.

"I've been at this club for 13 years; of course I want to play football. Here? Of course.

"The more I can play, the better for me and the more I can help team. I haven't thrown my toys out of the pram but I do want to play to help the team.

"Football changes. You have different challenges in your career. I would like to play more but I've tried to help the team on and off pitch."

Winning the Europa League would earn Champions League qualification, but Wayne Rooney says the focus must be on lifting the trophy itself... May 10, 2017

Rooney is in the squad for Thursday's match at Old Trafford, with United looking to build on a 1-0 first-leg win to secure their place in the final against either Ajax or Lyon.

With Sunday's 2-0 loss to Arsenal leaving their hopes of a top-four finish in the league looking slim, Rooney accepts that winning the Europa League - and returning to the Champions League as a result - is now a must.

"It's important for us to be back in the Champions League," he said. "This club belongs there. Realistically, it's going to be difficult to do it through the league.

"This is a European semi-final. It's the biggest competition we've had a realistic chance of winning in the last two or three years."

Victory in the tournament will see United end their first season under Mourinho with Europa League, EFL Cup and Community Shield trophies, and Rooney believes that it points to further success under the former Chelsea boss.

"This club will be successful under Jose Mourinho," he said. "If we can win Europa League, that will be three trophies [this season]. We're not far away from challenging again."