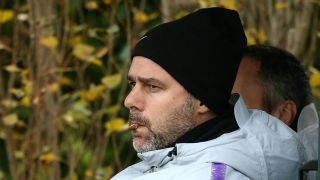 Mauricio Pochettino has dismissed speculation he was offered £15million a year to leave Tottenham and take charge of Real Madrid.

Pochettino has long been touted as a future Madrid manager and speculation over his Spurs future has been rife since last month's sacking of Julen Lopetegui.

Reports suggested Madrid offered Pochettino a blockbuster deal to succeed Lopetegui, only for the Argentine to turn Los Blancos down.

And Pochettino, who signed a new long-term Tottenham contract this year, addressed the latest speculation when he appeared in front of the media on Thursday.

"Look, I am so focused on my job at Tottenham," said Pochettino. "A new rumour appears every day. That rumour you tell me and the opposite appeared [in the media] the other day. Many things happen.

"Rumours are rumours and always happen, not only at Tottenham but every team. You can do nothing [about speculation]."

TEAM NEWS: (ankle) - scans have confirmed ligament damage to right ankle and is unlikely to be available until the New Year. November 8, 2018

Spurs confirmed on Thursday they will be without Mousa Dembele for around two months after the Belgium midfielder sustained ligament damage to his right ankle.

But Pochettino is hopeful Victor Wanyama and Eric Dier will be available for Saturday's Premier League match away to Crystal Palace.

"We hope that from the beginning of January he will be ready," Pochettino said of Dembele's injury. "After, it's about the evolution, it's very dynamic the evolution and how he's going to recover.

"Always it's about the patient, the player, and how he's going to react after the injury. We hope he'll be back as soon as possible and early in January to help the team.

"Always you miss all the players when they are injured. We were talking before, in 13 days we play five games. It's less than three days, every two and a half days we're competing. It's a massive effort for the players. That is why I am so pleased.

"In the same way I want to say some nice words to the staff, because they are helping the players to be ready in every single game. They work a lot and they don't have rest. That is important to have nice words for them.

"Of course I think we have some players back like Eric Dier and Victor Wanyama, they've started training with the group and we'll see tomorrow if they can be available to be in the squad for Saturday."