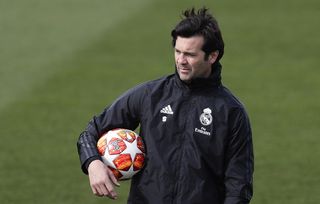 Real Madrid coach Santiago Solari has personally told his under-performing players that he expects more from them.

Solari’s side saw their season fall apart in the space of a week with back-to-back defeats in El Classico in the Copa del Rey and LaLiga, leaving them 12 points behind rivals Barcelona heading into this weekend. A 4-1 home loss to Ajax in the Champions League followed.

After arriving more than an hour late for his scheduled press conference at Madrid’s training ground on Saturday, Solari was asked if he felt his players had been worthy of the shirt.

“The majority, yes. Those who have not been, I have told them personally. They know that from me,” Solari said, as reported from the press conference by AS.

“We do a lot of self-criticism. In the dressing room self-criticism is a constant thing, not just something you do after a defeat.”

Speculation is growing that Jose Mourinho, who managed the club between 2010 and 2013, is being lined up to replace Solari.

When asked if he can hypothetically plan for next season, Solari replied: “I can’t answer hypothetical questions. It’s an honour to serve this club.

“I will always do my best, as I have done since my first day here. Our focus must only be on the next game. There are 12 left this season. The first is Real Valladolid tomorrow.

“It’s a tough moment, a difficult moment. You can keep doing your job, I will keep doing mine. It’s not easy for the fans, we’re a club that is used to winning, we’ve been through a glorious period and after being knocked out there is sadness of course, but also applause at what we have been achieved.”

Solari will be without Gareth Bale, Dani Carvajal, Vinicius Junior and Lucas Vazquez for the trip to Valladolid.