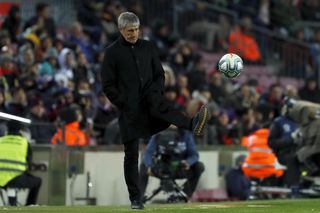 New Barcelona coach Quique Setien may opt to rest Lionel Messi for their Copa del Rey trip to Segunda B side UD Ibiza on Wednesday night.

Setien’s reign began with a 1-0 win over Granada on Sunday night and he will want to avoid any slip-ups in a tournament his side have won in five of the past eight seasons.

Speaking about his ability to convince Messi it might be best to sit out, Setien told Spanish media: “No-one can escape who Leo Messi is.

“With all the players, when I want something, I will try to convince them that it is best for them. I try to convince, rather than impose – they usually end up listening to me.”

Setien insisted he had not yet made his mind up about the strength of his team, but with a La Liga title battle and continued involvement in the Champions League, changes appear likely.

Setien added: “I have to watch the training session and take note of things. I’ll look at the rest of the players and make a competitive and balanced eleven.

“I always give importance to all the competitions. I always liked the Copa when I was a player. It is a very nice tournament and our objectives are clear.”

Ibiza coach Pablo Alfaro made seven appearances for Barcelona during a single season at the Nou Camp in 1992 and also played alongside Setien for Racing Santander.

Alfaro told Marca.com: “Barcelona already have their Liga and the glamour of world football with the Champions League, but the Copa levels it out and there’s space to humble them here.

“It’s only one night and it depends on how you go out, the motivation, how you start the game. There are many factors and this is our dream.”