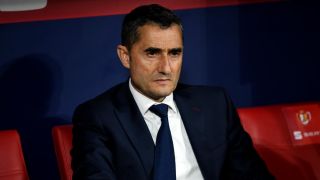 Barcelona have already splashed €118million ahead of the new LaLiga season and head coach Ernesto Valverde says his transfer business is not finished there.

Young midfielder Arthur, his fellow Brazilian Malcom and French defender Clement Lenglet have all arrived at Camp Nou in a busy July.

They could soon be joined by further reinforcements as the Spanish champions attempt to plug the gaps left by Andres Iniesta's move to Japan and Paulinho's return to Guangzhou Evergrande on loan.

Amid ongoing links with Miralem Pjanic and Frenkie de Jong, Valverde admitted he was looking to strengthen his midfield options.

"We're open to any possibility," the Barca boss told reporters.

"It's true that in the centre of the pitch we've lost important players in Andres and Paulinho so it's likely that we will make more signings.

"We will try to build the most competitive squad possible."

Barça is training at UCLA this afternoon. Paco Alcácer worked out on the side. July 28, 2018

Barca are better stocked in the centre of defence, where the purchase of 23-year-old Lenglet has given them five clear contenders for a starting spot.

Reports suggest one of Yerry Mina and Thomas Vermaelen will be squeezed out, although Valverde was hesitant to discuss which way he was leaning.

"We'll see how things go. There are a lot of rumours about defenders, we have to wait and see," he said.

"What we try to do is have the best defenders and those we have are very good."