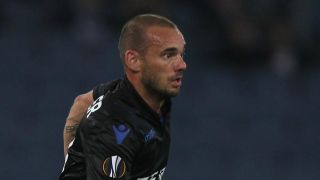 Netherlands international Wesley Sneijder has confirmed he is leaving Nice after a short spell with the Ligue 1 club.

Sneijder, who joined Nice in August after being released from his Galatasaray contract, has started only four league games this season.

And the Qatar Stars League will be the next stop for the 33-year-old after he accepted an 18-month deal to move to Al-Gharafa.

"It's a nice adventure and a fun challenge," Sneijder told RTL Boulevard.

"I am really happy to go for it together with my family."

Sneijder is the most-capped player in Netherlands history but he was left out by Dick Advocaat for October's World Cup qualifying double-header against Belarus and Sweden.