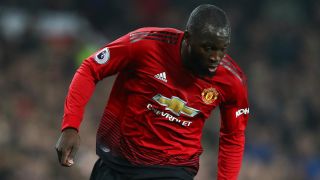 Manchester United caretaker manager Ole Gunnar Solskjaer insisted Romelu Lukaku is a "big part" of his squad, despite the Belgian striker finding himself on the bench at Old Trafford.

Lukaku has only started one match since Solskjaer replaced Jose Mourinho last month - a FA Cup third-round victory over Reading - amid a six-game winning streak.

The Belgium international has made three substitute appearances in the Premier League, scoring twice, as Solskjaer prefers a front three of Marcus Rashford, Anthony Martial and Jesse Lingard.

However, Solskjaer said Lukaku remains an important member of United's side ahead of Saturday's clash with Brighton and Hove Albion.

Our #MUFC team news ahead of #MUNBHA features the latest on @Alexis_Sanchez...— Manchester United (@ManUtd) January 18, 2019

"He's a big part of the squad, definitely, with his personality around the place," Solskjaer said. "There's no one scoring as many goals as him in training.

"There are the three who play the most but then you've got [Romelu Lukaku], you've got Juan [Mata], you've got Alexis [Sanchez], so I've got a front six I can rotate with and Rom is definitely going to be playing games."

Solskjaer, whose in-form United are sixth and level on points with fifth-placed Arsenal, continued: "I used to be one of four strikers when we played with two. Now we have six forwards and we play with three most of the time.

"We'll be OK to be able to rotate and there’s enough games and playing time.

"It's about taking the chances when you get them, and to be fair, Rom has scored three already and Marcus has scored three. Paul [Pogba]'s scored four since I came here. It's up to the strikers to take them."