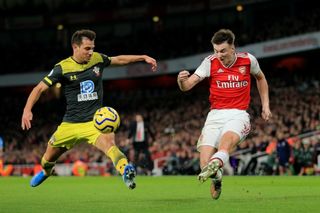 The January transfer window is a notoriously difficult time to complete deals and Arsenal have a record of making some curious short-term signings in recent years. Cedric Soares could be just the latest.

In 2014, Kim Kallstrom arrived on loan from Spartak Moscow, with a back problem delaying his debut until late March. He went on to make just three more appearances for the Gunners, but did score a penalty in their FA Cup semi-final win over Wigan Athletic.

Last year, Denis Suarez was recruited from Barcelona but played six times in a brief and disappointing spell at the club.

The Spanish midfielder’s time in North London was undermined by a pelvic injury picked up in his second game, against BATE Borisov in the Europa League round of 32. He left without making much impression on the Arsenal team and then signed permanently for Celta Vigo.

According to The Athletic, the Portuguese defender wasn’t expected to leave the Saints until the summer after the extent of the injury he suffered away to Crystal Palace was revealed.

Out of contract in just a few months, and still needing time to recover before he will be available for selection, senior figures at Southampton were reportedly surprised that Arsenal pressed ahead with a deal that will cost them around £5million in total.

Soares, who spent the second half of last season on loan at Inter Milan, was wearing a knee brace when he turned up at the Arsenal training ground to finalise his move and played no part in his new side’s goalless draw with Burnley.

The experienced right-back joined Southampton in June 2015 and was part of the Portugal team that won the European Championship a year later.