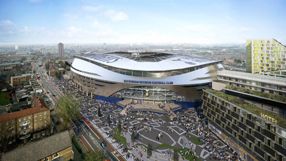 The Premier League club, who have also registered an interest in the taking over the Olympic Stadium after the 2012 Games, had plans for a new ground approved by Haringey Council earlier this year.

The $709.7 million development can now go ahead unless the government decides to intervene.

"I am content to allow Haringey Council to determine the case itself, subject to any action that the Secretary of State may take, and do not therefore wish to direct refusal or to take over the application for my own determination," Johnson said in a letter to the North London council.

The statement will provide a fillip to fans groups who have planned mass protests against a potential move to the Olympic Stadium in East London.

Tottenham, who have been based at White Hart Lane in North London for 111 years, were shortlisted along with West Ham United as preferred tenants for the Olympic venue earlier this month.