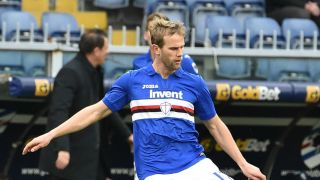 AC Milan will sign Ivan Strinic on a three-year deal when his contract at Sampdoria expires, according to the Croatia left-back.

Strinic joined Sampdoria for 2017-18 following two seasons at Napoli but began talks with Milan after he entered the final six months of his current terms earlier this year.

Although neither club have made an official announcement on the status of the transfer, the 30-year-old defender told 24sata in his homeland that the move is sealed.

"The season is finished so I can officially say I am no longer a Sampdoria player and I have signed a three-year contract with Milan," he said.

"The club will probably announce the transfer officially after the World Cup.

"Milan wanted me while I was playing for Napoli, but Napoli would not let me [join them]. That is why I went to Sampdoria last summer and got [the] chance to play.

"Everything was perfect, I played a very good first part of the season and really enjoyed it. I felt I was playing very good."

Strinic only started twice in Serie A after January but claims he was relaxed about the situation following assurances from Milan.

"Milan wanted me and waited for me, clearly told me they would wait until I am able to come," he explained.

"We were aware of the possibility I may not play much in spring but they wanted to bring me anyway and that is big deal."

Strinic was named in Croatia's provisional World Cup squad alongside Milan striker Nikola Kalinic and is looking forward to being reunited with his former Dnipro team-mate.

"I am so glad to be with Nikola Kalinic again, we get along very well. I waited for him in Dnipro and helped him to adapt; now he will do the same for me in Milan," he added.

"It was not easy for Milan this season to change almost the entire squad. It takes time and hopefully we'll do better next season. Although this one was not so bad either, we qualified for the Europa League."