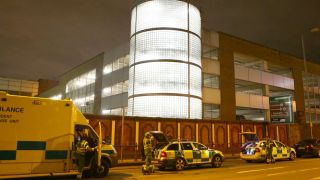 Tributes have poured in from the football community after a suspected terror attack in Manchester on Monday.

Greater Manchester Police confirmed 19 fatalities and 50 injuries following a blast at an Ariana Grande concert at Manchester Arena, which is being treated as a terrorist incident.

Reports of an explosion were heard just before 22:35 (local time) in Manchester as fans of the American singer fled the arena.

The football world led the tributes as British Prime Minister Theresa May expressed her sympathy and condemned the incident.

Premier League giants Manchester City - based at the Etihad Stadium - wrote on Twitter: "It's with great sadness we hear of the terrible events at the Arena. Our hearts go out to all affected and to our city's emergency services."

City captain Vincent Kompany took to Twitter to say: "I would like to express my deepest condolences to the families of the victims. It's a sad day for the great city of Manchester. #Unity"

United States international Carli Lloyd - who plays for City's womens team - wrote: "Sickened by what has happened in Manchester. Thoughts go out to everyone. This is literally right around the corner from me. I am safe."

MLS outfit New York City - owned by the City Football Group - said: "Our hearts go out to our friends and all those affected in Manchester following tonight's tragic events."

Mark Bosnich - who also played for United - wrote: "Thoughts and prayers with those affected by the events in Manchester 2nite and the good people of Manchester."

"Truly awful news from the great city of Manchester. Thoughts are with all those affected," said former England international Gary Lineker.