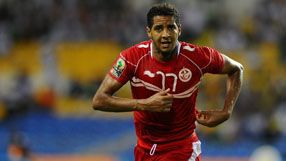 The former French-based striker had to come off after 16 minutes of Tunisia's 1-0 win over neighbours Algeria in Rustenburg on Tuesday.

"He has to rest for the next six weeks," said a federation statement.

Jemaa, 28, was competing at his fifth successive Nations Cup tournament.

Tunisia will not be able to replace him as they did injured defender Fateh Gharbi on Monday, before their opening game, when they flew in Houcem Haj Mabrouk from CA Bizertin as a replacement.

Tunisia next face Ivory Coast in Group D on Saturday.