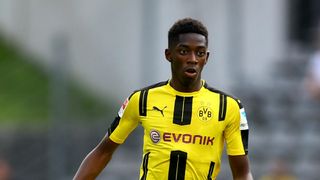 Samuel Umtiti says he would welcome Borussia Dortmund attacker Ousmane Dembele with open arms if his compatriot were to make the move to Barcelona.

Dembele was heavily linked with a move to Camp Nou last year but eventually opted to join BVB instead, feeling he had a better chance of regular first-team action at Signal Iduna Park.

The 20-year-old has quickly become a key figure at Dortmund, scoring 10 goals in 49 appearances in all competitions, and recent reports suggest Barcelona continue to keep a close eye on him.

"I know that Barcelona are interested in him," Umtiti told L'Equipe.

"But all parties involved will have to reach an agreement. He would bring a lot to Barcelona with the quality he possesses and with the things he is capable of. I would welcome him with open arms.

"But I have not been discussing it with him. I will talk to him about it if and when it becomes official.

"Barcelona already wanted him last year and he knows what to expect. We will have to wait and see what happens.

"He is always welcome at my place, I will happily look after him."

Dembele has a contract with Dortmund until June 2021.