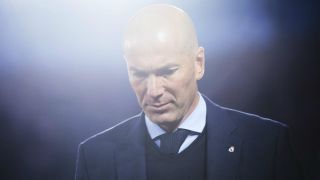 Raphael Varane admitted former head coach Zinedine Zidane will be hard to replace and it will take a strong character to lead Real Madrid next season.

Zidane surprisingly left the Santiago Bernabeu last week after two and a half years, guiding the club to three successive Champions League titles and nine trophies in total.

France international defender Varane, who made over 40 appearances for Madrid in 2017-18, acknowledged that it will be hard for the next coach to match his achievements amid links with Tottenham's Mauricio Pochettino and Juventus boss Massimiliano Allegri

"The new coach must be able to evolve in the Madrid context because it’s not easy, it's a context with a lot of pressure and expectations," Varane said.

"Zidane has done something that it will be difficult to do again. What he has done in two and a half years is extraordinary.

"We're not going to ask the new coach to win so many trophies in such a short time, but he will have to adapt to Real Madrid.

"There are very good coaches in Europe - the new coach will have to have the character to take up this challenge."

Varane is preparing for France's World Cup campaign, where they are pitted in Group C with Australia, Denmark and Peru, but said countryman and 1998 World Cup winner Zidane did not speak with him at length about the tournament in Russia.

"He [Zidane] didn't give me much advice before the World Cup,' he said.

"He just told me to rest and disconnect because it’s been a very busy season. He wished me good luck. Nothing special."