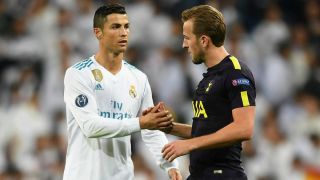 Tottenham defender Jan Vertonghen says he would not swap Harry Kane for Cristiano Ronaldo or any other centre-forward in the world.

England striker Kane has scored 13 goals in 12 appearances for Spurs in a blistering start to the season, including five in three Champions League outings.

The 24-year-old missed his side's 1-0 defeat to Manchester United on Saturday with a hamstring problem but manager Mauricio Pochettino hopes to have him back for the visit of Real Madrid on Wednesday.

Vertonghen believes Kane is probably the best number nine in the world and says there is no player he would rather have at the spearhead of Spurs' attack.

"Obviously they're both unbelievable players," he told a news conference on Tuesday when asked about Kane and Ronaldo.

"Ronaldo has his qualities and Harry has his. We've got to show respect to Ronaldo for everything that he's won over the years, and that he's still doing and the level he's still playing at.

"It's hard to compare because they're different types of players, but Harry is, for me, one of the best number nines in Europe, maybe the best. He shows that every week, and I wouldn't swap Harry for any player at the moment."

TEAM NEWS: (hamstring) trained with the squad today and will be assessed ahead of tomorrow’s game. October 31, 2017

Vertonghen insists Spurs will go out to beat Madrid regardless of whether Kane is fit enough to start the match.

Asked if they could win without him, he said: "Yeah, definitely. I can't see why not.

"Obviously, Harry is a very important player on and off the pitch for this group. Having him is always a major boost, but definitely we can beat them and that's our intention going on the pitch without Harry Kane –  we go for the win."

Spurs held Madrid to a 1-1 draw at the Santiago Bernabeu on matchday three, meaning they sit top of Group H ahead of the meeting at Wembley.

A win for either side will guarantee their place in the last 16.