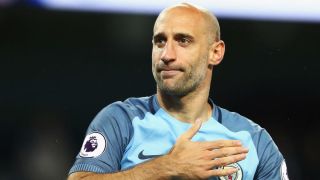 Manchester City fans were in for a surprise before Pablo Zabaleta sealed his transfer to West Ham.

The club invited seven supporters to film tributes to the departing defender, who left them to join Slaven Bilic's men on Friday after nine years as a fan favourite in Manchester.

What City didn't tell them, though, was that Zabaleta would be there to surprise them – leading to some emotional reactions.

And Zabaleta's goodbye to one young fan is a particularly heart-wrenching watch.

Check out the video here: