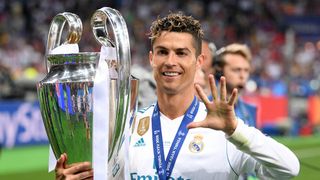 Gareth Bale struck twice from the bench as Loris Karius' errors proved key in Madrid's 3-1 win over Liverpool in Kiev on Saturday.

But Ronaldo's post-match bombshell, the Portugal star indicating he is considering moving on from Madrid, will dominate the headlines.

Zidane, however, shrugged off reports Ronaldo could seek a Santiago Bernabeu exit after helping the LaLiga giants to four Champions League crowns in five years.

"We do not think about that," said the Frenchman.

"Only about what we are doing. Then we'll see what happens. "

Zidane is the first coach to record three consecutive titles in Europe's premier competition and he hailed the work of his side over recent years.

"We have no words. It's what this team has. Talent and work," said Zidane.

"We have hope and desire to do things well. We did it again.

"I've told the players to enjoy it because this is not going to be seen again."