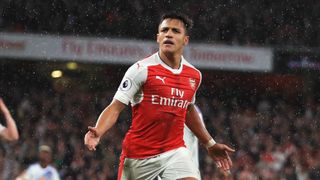 Arsene Wenger is confident Alexis Sanchez will be passed fit to face Chelsea in the FA Cup final, although Gabriel is definitely out and Shkodran Mustafi remains a doubt.

Arsenal face Chelsea at Wembley on Saturday looking to salvage silverware from a campaign that has seen them miss out on Champions League qualification for the first time in 20 seasons.

And they are hopeful forward Sanchez will come through fitness tests on a hamstring problem in order to play against Antonio Conte's men.

However, Gabriel is definitely out after being taken off on a stretcher against Everton on Sunday with a knee injury, while Mustafi is "still sick" and doubtful with a suspected concussion.

That leaves Arsenal with big problems in defence given Laurent Koscielny is suspended after being sent off in the Everton match.

Rob Holding and Per Mertesacker – who has not started a match for over a year – are the club's only other senior centre-backs.

"Alexis is alright," Wenger said at his pre-match media conference.

"We will see as he needs to go through some tests. But knowing the player, knowing his character and commitment to the club - which I don't question at all - he will do absolutely everything to be fit for Saturday.

"Gabriel is out for six to eight weeks. We had a scare about his cruciate but it is medial and the positive is he avoids surgery.

"Shkodran Mustafi we have some worries. He is still sick at the moment and has not trained yet. I don't know how much chance he has, I have to listen to the medical people."

“The team has given so much and they really want to win something this season.”May 24, 2017

Wenger continued: "It just shows you how unpredictable football can be because we played at home when your mind is on attacking and we lost two centre-backs.

"It is absolutely unbelievable and unpredictable. We are hit hard in a position where we have to be strong on Saturday.

"We have to find solutions and hopefully I can find some good ones. I have to decide that until Saturday. We will test things in training until then.

"Alex Oxlade-Chamberlain is in contention because he is back in training."