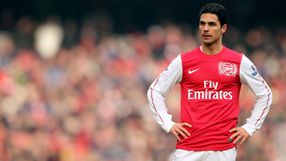 The Spaniard has been one of Arsenal's best players in their surge to third place in the Premier League but they will miss him for the final four games of the season.

"It is season over for him but he doesn't need surgery, which is what we were scared of," Wenger said at a news conference ahead of Saturday's crucial home game against sixth-placed Chelsea.

"So he will be out for six to eight weeks. It is an ankle problem but just a sprain."

Better news for Arsenal is the return to the squad of midfielder Abou Diaby, who has made just three appearances this season after a succession of injuries.

"We still have to be a bit cautious with him because we had so many setbacks. If all goes well he will be in the squad," Wenger said.

Arsenal's surprise home defeat by Wigan Athletic on Monday left them five points ahead of fourth-placed Tottenham Hotspur and Newcastle United and seven clear of Chelsea, all of whom have a game in hand on the Gunners.

Third place guarantees an automatic spot in the group phase of next season's Champions League while finishing fourth would mean a tricky play-off.

"I don't know [how many more wins we need], we just want to win the next one," Wenger said. "I believe our target is just that. We have to think that we have been on a great run, we have a fantastic opportunity but we also just need to focus on the next game and win it."