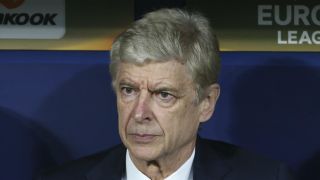 Arsene Wenger will not be involved in the decision-making process for the appointment of his successor as Arsenal manager.

Wenger's 22-year stay at the club has only three matches remaining and Arsenal have given no clues about potential replacements for the Frenchman.

Former captain Patrick Vieira and Celtic's Brendan Rodgers have been linked with the post, and the 68-year-old clarified he will have no say over who the next person in the Emirates Stadium dugout is.

"I'm not involved in that and it's not my job. My job was to perform with the team and my job is not to choose my successor," Wenger told Sky Sports. "If somebody asks me an opinion I will give it, but I think a club works well when everyone does their job."

Liverpool manager Jurgen Klopp's long-time assistant Zeljko Buvac, who has been given a leave of absence by the Reds, is reportedly among the frontrunners for the post.

"I don't know him well," Wenger said. "Publicly I think it is better I do not talk about it. It can disadvantage the other candidates and I don't want to put pressure on people. It is better that they feel completely free to take who they want.

"[My successor] will need to make this club the priority of his life and commit completely and totally like he owns the club. There is no other way to manage a club of this stature than to think that my life depends on what is going on here. They must give absolutely everything to do well."

“I’m like the team, very sad and very disappointed. I’m very frustrated as well. I’m very, very sad to leave the club with this exit.”May 3, 2018

Arsenal were beaten by Atletico Madrid in the Europa League semi-finals on Thursday, Diego Costa scoring the only goal in the second leg to knock the Gunners out 2-1 on aggregate.

And Wenger, whose side will miss out on Champions League qualification for the second year in a row as a result, accepts it was a particularly painful loss.

"Super sad - the next day is always worse than the night before," Wenger added. "Over the two games I feel that we paid a high price for not being clinical enough in what we produced.

"My life is to win football games, and that is what I'll do. For the last few games, I'd like the team to be supported very well" - Arsene Wenger April 22, 2018

Burnley visit Emirates Stadium on Sunday in what will be Wenger's last home match as Arsenal manager and he is expecting an emotional occasion.

"It's sad but all love stories come to an end and not all of them finish well. Most of the time they don't finish well," Wenger said.

"I'll feel sad because I love this club and I love what the club represents. You don't give 22 years of your life and walk away easily. I have dealt with difficult situations in my life and I will do it again.

"Of course I will go back, why not? First of all, I have to decide what I do in the future and take a little bit of distance. The intensity I've had in the last 22 years, it demands a little bit to take a reflection."