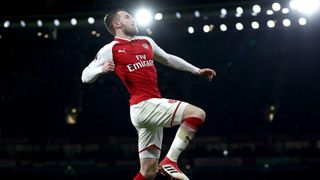 Arsene Wenger is prepared to let Aaron Ramsey enter the final year of his Arsenal contract, but is confident the midfielder will stay at Emirates Stadium.

The Gunners were involved in long-running contract sagas with Alexis Sanchez and Mesut Ozil, which eventually led to the former joining Manchester United in January and the latter penning new terms last month, while Jack Wilshere's deal expires at the end of the campaign.

Ramsey is also yet to sign an extension despite his agreement running out in 2019, and there have been suggestions Arsenal could cash in during the close-season to avoid a repeat of the Sanchez situation.

But when asked if Arsenal will take a different approach, Wenger replied: "No not at all.

"You want absolutely to find problems. I don't know what you look for. We want the players to stay."

Wenger remains convinced that the principles instilled at the club will be enough to convince players to stay put.

"We want the players to stay at this club," Wenger added.

"That's why I always speak about values. This club has been created by people who work in the fabric. One of the few clubs in the world.

"We want our players to be proud of the values that have been created by people. They are based on hard work, humility, desire to be together.

"Those are the values we want the players to take charge of, stay together and show these values.