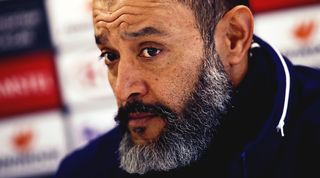 After Wolverhampton Wanderers conceded a late goal and succumbed to Sevilla in last night's Europa League quarter-final, boss Nuno Espirito Santo suggested that the club could be busy in the transfer market as a result of not having European football next season.

“We need more players to help us,” Nuno claimed. “It’s a small squad.”

Indeed, only 12 Wolves players completed over 10 Premier League games last season - a season that started with preliminary European qualifiers and has only just ended. Now, with just one year left on his current deal, Santo is keen for the Wolves hierarchy to back him in the market for new players this summer - or risk losing him next season.

The club's main priority is to keep greased-up speedster, Adama Traore, though Wolves are looking to add to the side that finished seventh in the league. Topically-named Porto star, Jesus Corona, is one option for an attack which has relied less and less on Pedro Neto this campaign.

Wolves may also look to big names in their search to improve the squad - particularly at left-back, as Jonny Otto is facing a lengthy spell out injured. Napoli star Faouzi Ghoulam is being tracked right now to bolster the left-hand side of the pitch, with the club said to be interested in both his defensive and attacking ability. Santo could rival Chelsea, too, for the signature of Ajax full-back Nicolas Tagliafico.

Dwight McNeil is another name linked with Wolves. Burnley boss Sean Dyche has admitted that a good offer might be hard to turn down, with McNeil offering excellent work-rate off the ball as well as on.

Like Adama Traore, the 20-year-old is capable of playing both a full-back role or in a more advanced position on the field - McNeil though is a target for a few sides with Leicester City, AC Milan and Juventus all reportedly eyeing a move for the player.

Nuno Espirito Santo has taken the club from the Championship to the brink of Champions League football. With his contract officially up this time next year, however, he may feel he is in a good position not just to bargain for a better deal but demand big reinforcements on the pitch.

Despite the Portuguese declaring in February that Wolves is his “obsession”, there are a number of clubs who will be eagerly watching the situation at Molyneaux develop over the course of the next season.

Santo has already outgrown clubs like Newcastle United and Crystal Palace - who may be thinking about their next managerial appointment already - and instead could become a target for a side in the Champions League. The Wolves boss has previously been linked with the Chelsea hot seat, for example - Roman Abramovich has put a lot of faith in Frank Lampard, though could be convinced to opt for a more pragmatic manager if the Blues underachieve this season.

Manchester City boss Pep Guardiola may be leaving Eastlands next season too, which might trigger a shake-up in football, with Arsenal manager Mikel Arteta still in favour with his old employers, and Santo's agent Jorge Mendes closely linked with Gunners chief Raul Sanllehi.

Elsewhere, there are rumours of Antonio Conte leaving Inter Milan and Juventus's Andrea Pirlo is an unknown quantity. Could Nuno end up in the big leagues?