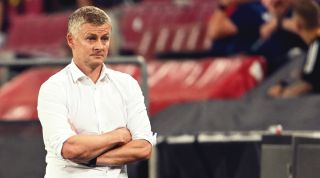 Manchester United's attempts to bring Jadon Sancho to Old Trafford this summer have hit a wall, according to reports, with United now turning to €140m Barcelona flop Ousmane Dembele among other targets.

The Frenchman has struggled since his huge move to Catalonia, but United boss Ole Gunnar Solskjaer sees him as a suitable creative winger who could be used as a Plan B, should the Sancho move fail to transpire.

Borussia Dortmund chief Michael Zorc this week claimed that Jadon Sancho is set to remain at Signal Iduna Park for the following season. The England star had been heavily linked with a move to United, Chelsea and even Real Madrid, but apparently signed a new deal privately which included a pay rise.

Now, Sancho may do a u-turn and hand in a transfer request to push the United transfer ahead.

It's thought that Dortmund are looking for €100m for their talent, while Ed Woodward offered €60m in their first bid. Dortmund apparently gave the Red Devils a deadline of August 10 to sign Sancho - this has now passed.

Ousmane Dembele may represent a significantly cheaper option - with Barcelona keen to listen to offers for an injury-prone player who has failed to establish himself in their set-up since signing. Should Solskjaer rehabilitate Dembele back to the devastating form he showed at Dortmund, however, he might not be too much of a downgrade from Sancho.

THE SANCHO SAGA Jadon Sancho pursuit will not be postponed

Other wide options that Manchester United may entertain include former player Wilfried Zaha from Crystal Palace; Palace are working on a deal to bring Ismaila Sarr back to the Premier League from Watford. Links to Aston Villa's Jack Grealish also persist.

Another former player, Memphis Depay, could be in the frame, while United might be monitoring Aaron Ramsey's situation at Juventus, following the reported admission from new manager Andrea Pirlo that the Welshman doesn't fit into his plans. United had a £50m bid for Ramsey turned down by Arsenal the summer before he left on a free.

United are keen to take advantage of the global recession and apparently relaxing of FFP laws this summer to steal a stride on rivals.