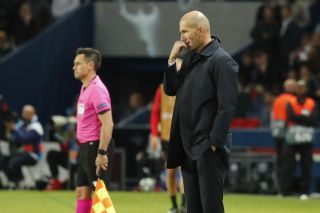 Real Madrid boss Zinedine Zidane has dismissed questions over his future as the pressure on him ramps up ahead of Sunday’s LaLiga clash with table-topping Sevilla.

The midweek 3-0 defeat by Paris St Germain in the Champions League has led to reports Zidane could be on his way out only six months after returning to the club he guided to three European crowns in his previous spell.

Speculation has already begun as to who might replace Zidane but the Frenchman shrugged off the rumours during a press conference on Saturday.

👔🎙 Listen to Zinedine Zidane respond to #RMTV's question at the press conference ahead of our league match against @SevillaFC_ENG.#RMLiga | #HalaMadridpic.twitter.com/mODg3GkmTv— Real Madrid C.F. 🇬🇧🇺🇸 (@realmadriden) September 21, 2019

“Nothing surprises me,” he said. “Always there are difficult moments at Real Madrid. Not just here but at any club.

“We have had more difficult periods than we are having at the moment.”

Jose Mourinho has been linked with a return to his former club, while former Juventus coach Massimiliano Allegri is seen as another potential candidate.

“I know what it’s like,” Zidane said when asked about the speculation. “It’s not about whether it bothers me or doesn’t bother me.

“When you lose, things have to change. It’s difficult at the moment but it’s the reality.”

Asked if he felt the club were questioning him behind his back, Zidane added: “Not at all, the complete opposite. I think the club helps us all to be strong and supports all the people that work here.

“If it’s not like that it would probably be best to leave.”

Madrid, who have eight points from their opening four games, travel to a Sevilla side who top the early table with 10 points from four matches.

“Tomorrow will be a difficult game,” Zidane said. “We know they are the leaders and are playing really well. But we want to play a good game and we will do it.”

Sevilla are guided by Julen Lopetegui, the man who replaced Zidane at Madrid last summer but survived only two months in the role.

But the former Spain boss insisted Sunday’s match has no extra meaning for him.

“There are three points available and that is enough motivation, even if we know the importance of facing Real Madrid,” he said.

🎙 Julen Lopetegui: "Tomorrow we come up against a great team and we have to be at our best all over the pitch. @realmadriden are a fantastic team, but so are we".#SevillaFCRealMadrid#WeareSevillapic.twitter.com/XGFAty5SAu— Sevilla FC (@SevillaFC_ENG) September 21, 2019

“I remember very well all the clubs where I have been and I always stay with the positive.

“I try to be responsible and ambitions and tomorrow will be no exception. The protagonists are the players, not the coaches.”

Lopetegui declined to comment on Zidane’s predicament, saying only that he had the “maximum respect” for the Frenchman.

Both men know what it is to feel the intense pressure that can come with the Madrid job, but Zidane insisted he had not regrets over returning to the club, even if his legacy may be damaged if he cannot turn their fortunes around soon.

“It would be easy to say yes at a difficult time, but it wouldn’t be true,” Zidane said.

“I’m happy be back. When I hear your questions it makes everything look gloomy but when you win everything changes.

“We have to work harder.”