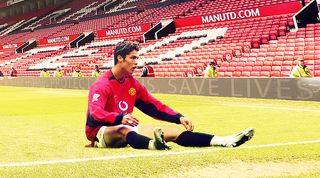 Usually, playing football matches behind closed doors is reserved for clubs who have broken rules. It's a traditional naughty step, handed out by governing bodies to prevent a home advantage of a roaring crowd.

If the Premier League returns this summer, complete with the closed-door policy, there will be an unprecedented look and feel to the league. The fans are, to many at least, what makes English football so special.

The oohs and the aahs merely punctuate the great moments in football. If you were lucky enough to be in the stadium for say, Thierry Henry's spectacular solo destruction of Tottenham Hotspur, or Phil Brown lecturing his Hull City players on the pitch - later recreated by Jimmy Bullard's hilarious celebration - you forever have a story that none of your mates have.

So... what if these incredible Premier League moments took place in front of no crowds? What would that look like?

It may have come off his shin, but at least in this version no one was there to mention that.

Aguerooooooooooo wraps the title up for Manchester City

Blackburn Rovers clinch the title in 1995

There's something quite sad about Colin Hendry holding Rovers' triumphant trophy aloft in front of an empty stand, isn't there? At least we've taken it back to Ewood, rather than Anfield.

Thierry Henry knee-slides in front of the Tottenham fans

The image Arsenal cast into a statue for Henry: the man himself once claimed that he has the photo and that every time he looks at it, he notices another face in the crowd he'd never seen before.

Leicester City pull off the miracle in 2016

Jamie Vardy's having a party... but only the Leicester squad are invited.

It's the defining match in Premier League history for many - but the magic of Anfield isn't quite the same with an empty crowd.

He scored so many beauties. Perhaps we would've all heard the twang of the crossbar if Selhurst Park had been empty.

Eden Hazard turns it on to decide the title

Perhaps the feistiest game in the last decade: maybe Stamford Bridge would have felt like less of a cauldron if it were empty.

Hull get a dressing down on the pitch

Really, this moment is a lot less embarrassing for Hull's players if no one was there to see it.

If Cristiano Ronaldo is chopped to the ground and no one is there to hear, does he still make a sound?