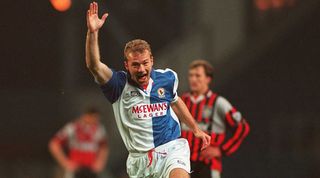 Each player’s goal totals are below as well as their football nation. There’s 12 minutes on the clock and we’d love to know your score @FourFourTwo – we’ll retweet the best efforts. Why not challenge some friends while you’re at it too, eh?

THEN TRY Quiz! Can you name the 29 managers who've bossed three or more Premier League clubs?

The early years of the Premier League were a rich time for strikers. An alarming number were English too, which makes us want to roar with the strength of 3,000 lions in the office (except we promised HR we wouldn’t).

However, it’s the most prolific we’re testing you on. From lethal frontmen to goalscoring midfielders, below is every footballer to score 30 Premier League goals from the start of the 1992/93 season to the stroke of midnight on December 31, 1999.