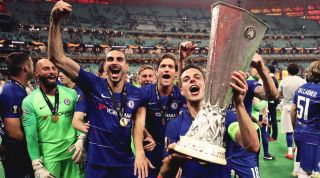 Ten minutes on the clock, 60 teams to guess.

NOW TRY Quiz! Can you name every club to reach a Champions League or European Cup final?

Unai Emery knows a thing or two about winning the Europa League - but as he found out last year, it's pretty gutting to lose the final.

Some teams pin their hopes on the Europa. It helps that these days you get a free Champions League spot, just by lifting the trophy. Not all are successful though.

Over the years, the UEFA Cup/Europa League final has played host to some of Europe's most esteemed names - and a few random clubs that you've barely heard a peep from since.

As Manchester United and Wolves head into the last-16 of the competition, we want you to name those that have reached the final two.