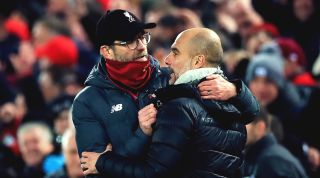 It's the Wenger vs Ferguson of our time. Clough vs Revie. Mourinho vs anyone who rises to his bait.

Pep Guardiola and Jurgen Klopp are arguably the two greatest coaches in the game right now. They've shaped the modern face of football between them, and let's face it, the pair are probably favourites for most competitions in England and beyond.

It's a privilege to have Josep and Jurgen in the Premier League. Tonight sees another twist in the tale of the two's rivalry as Guardiola's Manchester City give a guard of honour to Klopp's Liverpool, as the champions' crown passes from the Etihad to Anfield.

There's plenty of history between the two as well. Can you remember which players have played their part in it?