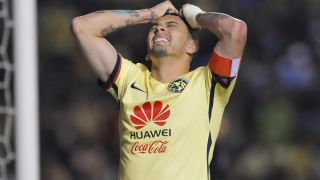 Defending champions America will be looking to put a league defeat behind them when they travel to Tigres UANL for the first leg of the CONCACAF Champions League final on Wednesday.

A 1-0 loss away to Queretaro saw second-placed America lose ground on league leaders Monterrey, who now hold a six-point advantage after 14 rounds in Liga MX.

America - who were crowned Champions League winners for a sixth time last year - have lost their past two games against Tigres going into the all-Mexican decider.

But, despite their indifferent form against Tigres, America coach Ignacio Ambriz insists he is not concerned.

"No, we won't go home happy [from the Queretaro loss], and the mind cannot distract us from the final," he said.

"We have to now think about what will come in the final.

"But I am calm, even though we have lost twice in a row [against Tigres] it should have been the opposite.

"I know the demands of the team."

Tigres, on the other hand, are set to compete in their first Champions League final after knocking out Queretaro in the semi-finals.

The side are eighth in the Liga MX table, seven points behind America, but will be buoyed by their form against the defending champions.

France international striker Andre-Pierre Gignac has been in stunning form for Tigres since his move from Ligue 1 outfit Marseille in 2015 and will pose a big threat in the final.

But with the tie decided over two legs, it is difficult to see the first game at Estadio Universitario being a very high-scoring affair.