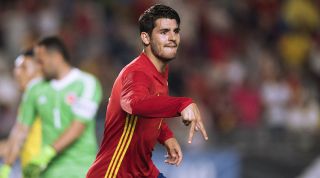 Argentina manager Jorge Sampaoli may just be the luckiest man in football when it comes to his available options up top (if not in defence). Together, Lionel Messi, Sergio Aguero, Gonzalo Higuain, Paulo Dybala and Mauro Icardi have managed a whopping 130 goals between them this season for their respective clubs – and all are certainly worthy of a seat on the plane to Russia.

However, such a plethora of quality options means an almighty selection headache for Sampaoli, who has no choice but to leave one (or perhaps more) of his Fab Five out. Inter bad boy Icardi didn’t make the most recent Argentina squad, despite having scored 22 goals in Serie A this season, and seems most likely to be culled.

It’s easy to label Givanildo Vieira de Sousa – Hulk to you and us – yet another player who moved to China ‘for the money’. Admittedly, the Brazilian turned down numerous opportunities within Europe to join Shanghai SIPG in 2016, but his motivation certainly wasn’t all green (no pun intended).

Having struggled in his home country during the early stages of his career, Hulk’s four-season stint in Japan as a youngster helped propel him to greater heights, so his return to the continent that shaped him into a superstar was an understandable choice.

Motives aside, Hulk's decision to move back to Asia won’t have helped the impression that his career is winding down. Team-mate Oscar still makes the Brazil squad, but the 26-year-old isn’t quite as tainted by past international failures. Hulk, who turns 32 this summer, has younger and better players blocking his path to the team.

Out of action since December 2017 after suffering a groin injury, Juventus winger Cuadrado’s situation will be being monitored daily by Colombia coach Jose Pekerman. He will be praying the former Chelsea winger is fit in time for June 19, when his side take on Japan in their opening World Cup game.

The player’s club manager Massimo Allegri has been cautious, saying: “It’s an inflammation, these things can go away in two days, they can last three months or they can last six months. We hope not.”

However, both Pekerman and Allegri will have been boosted by the news that Cuadrado made a tentative return to training with Juve this week. Whether he will be match sharp for the World Cup is another matter.

The Macaulay Culkin of world football? Sanches is unfortunately looking like a prime example of what can happen when you get too much, too young.

The Portuguese midfielder exploded onto the scene as a teenager in 2015/16, starring as Benfica romped to the Primeira Liga title. The same year, Sanches received his first international call-up and lifted the European Championship trophy only four months later, having been named young player of the tournament.

A €35m move to Bayern Munich followed, but after failing to impress at the Allianz Arena, Sanches was loaned to Swansea in 2017. But the now-20-year-old has since struggled to adapt to Premier League football. Sanches’s abrupt decline means he’s likely to be spending the summer home alone.

Travel chances: Needs a phenomenal end to the season

A player who on talent alone should be travelling to Russia, but Reus’s place in the Germany squad is by no means cemented.

Borussia Dortmund’s talented forward suffered an injury to his cruciate ligament last May, which led to nine months on the sidelines. The 28-year-old made his return to action last month, and after scoring three goals in five games since his comeback, it appeared that he might go directly back into Joachim Low’s squad.

Yet such is the fierce competition in the Germany side these days, that he’s currently out of the picture. The players competing for Reus’s spot – notably Leroy Sane, Julian Brandt and Andre Schurrle – have been excellent in his absence. Unless he can prove otherwise, Reus is a luxury Germany could afford to miss.

Travel chances: Only if he keeps up his good form

Morata was Spain’s top scorer at Euro 2016 with three goals, and after netting 20 for Real Madrid the season after it looked likely that he'd be leading the line for his country again in Russia.

Nine games into his Chelsea career, and with a further eight goals to his name, his place at the head of Julen Lopetegui’s side this summer looked a certainty.

However, a dismal run of form since the turn of the year – since when the Blues striker has scored just once – has forced Lopetegui’s hand. Morata was dropped from the Spain squad for the recent friendlies against Germany and Argentina, and his replacements Rodrigo and Iago Aspas were on the scoresheet in both games.

Russia suffered a huge setback earlier this March when the news broke that star player Kokorin would spend five months on the sidelines.

The Zenit forward tore an anterior cruciate ligament during his side’s Europa League clash with RB Leipzig, meaning he is to undergo surgery in the coming weeks to repair the damage.

Barring a remarkable recovery, the hosts will have to do without their top scorer (Kokorin has 12 goals in 48 caps for his country). His absence is yet another big loss to an already threadbare Russia squad, after defenders Viktor Vasin and Giorgi Jikia were ruled out of the tournament earlier this year.

It's not often that a striker who’s approaching 100 goals for club and country across the past five seasons misses out on a major summer tournament. Unfortunately, however, that's the situation that Atletico Madrid striker Gameiro is facing.

Like Argentina’s Sampaoli, France coach Didier Deschamps has the pleasurable problem of too many attacking options at his disposal. Among those are Olivier Giroud, Kylian Mbappe, Antoine Griezmann, Alexandre Lacazette, Anthony Martial and Ousmane Dembele – and it’s a list which Gameiro, fairly or not, is at the bottom of.

Travel chances: Should go, but won’t

Wilshere’s potential inclusion for England this summer continues to divide opinion. There are those who think he should go – including his club manager Arsene Wenger, who believes the midfielder should be a “regular player in the England national team” when fit.

There are also plenty who think he shouldn’t; Roy Keane for one. In February, the Irishman described the Arsenal midfielder as “probably the most overrated player on the planet”.

The only opinion that really matters is that of Three Lions boss Gareth Southgate, however. Southgate included Wilshere in his squad for the recent friendlies against the Netherlands and Italy, but in typical fashion, the 26-year-old withdrew through injury. His spot on the plane now hangs in the balance.

Travel chances: Good if he ends the season well with Arsenal

Sigurdsson might not be an international superstar in the same category as Lionel Messi, Cristiano Ronaldo or Neymar, but his importance to his national side is just as high.

11 players with the worst tattoos in football

The Everton midfielder was the driving force behind his country’s improbable success at Euro 2016, when they knocked out England to reach the quarter-finals.

If Heimir Hallgrimsson’s side want to repeat that historic feat this summer, they may have to do it without their star man. Sigurdsson sustained a nasty knee injury with Everton earlier this March, with the Toffees suggesting that he could be out for as long as eight weeks with ligament damage.

That timeframe means he should be back for the World Cup, but his presence depends very much so on avoiding any setbacks in his recovery.

Travel chances: Looking up – Iceland would risk him if needs be